Award-winning Ceremony held for "Boeing Supplier of the Year"

"Boeing Supplier of the Year" is a very prestigious award presented to suppliers recognized by The Boeing Company for exceptional performance in quality, on-time delivery, price, etc. from among 13,000 suppliers from 47 countries around the world. This year, 14 companies (including ShinMaywa) and one university were given awards.

ShinMaywa won the same award for the first time last year, making this time the second consecutive it has been honored in the "Major Structures" category. The ceremony, held at production sites of Konan plant and Takarazuka plant, was attended by Boeing Japan president, George Maffeo, and Jeff Hanley, director of Japan and Korea Structures for Boeing Commercial Airplanes Supplier Management. 400 people in all from ShinMaywa were present.

In the ceremony, Mr. Maffeo spoke "Two years running is an incredible feat that very few suppliers ever achieve." in his speech honoring ShinMaywa's remarkable accomplishment and Mr. Kanji Ishimaru, Director, Member of the Board, and Senior Executive Officer told "We will continue to create an upward spiral through our kaizen activities and continue to respond in line with Boeing's expectations" to convey his enthusiasm for the future.

ShinMaywa is responsible for the design and production of the wing-to-body fairing for the Boeing 777 aircraft and the main wing spar for the 787 Dreamliner. Enhancing performances of quality, deliveries and costs in these businesses, ShinMaywa continues to be committed to manufacturing products that meet the expectations of its customers, continuing to develop original technology and playing a key role in the aircraft industry. 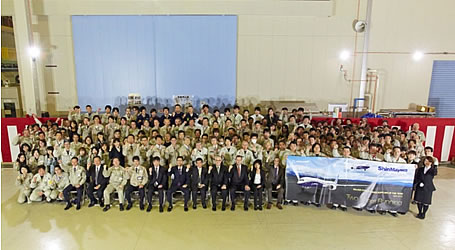 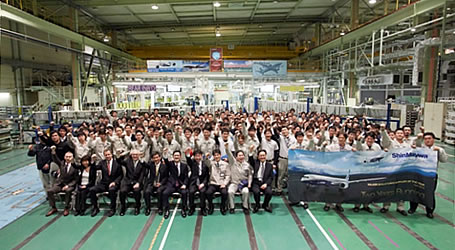 Information in the news releases is current as of the date of the news announcement, but may be subject to change without prior notice.